I came across this lovely picture on my facebook feeds, the picture shows an attractive woman with an ornate tattoo and a Katana sword for a prop. 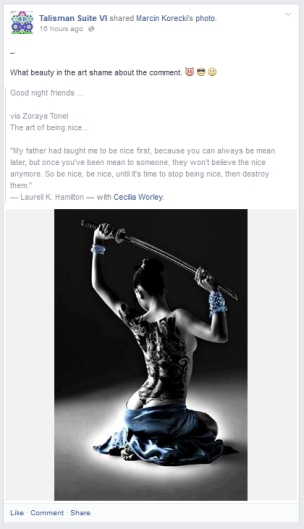 The caption is very worrying, the person that is responsible for it is named but I don’t know them.

The worrying thing is that conmen, thieves, rapists and paedophiles all use a similar tactic. They use being nice, being approachable to gain confidence, then they pounce when their prey’s guard is down.

The destructive nature of man is bad enough as it is in a straight conflict situation, but when the scum of the earth (been drugged, abused and beaten and left for dead by some of these people) start to use subtlety and wiles to glean the gullible or unwary, then the arsenal must be restocked and the hunt should be to destruction.

If you don’t like someone, avoid them if they are in your friends circles, if you do then be natural about it. If you go off someone, and you turn nasty then it is in your nature and is definitely not an ‘Art’, the wiles of the dark nature of man are craft, sly as a fox, even cunning, but don’t equate this form of behaviour with ‘Art’ when it clearly belongs in the nature of the beast and is at best low craft at work.

Doesn’t Quite Add U….

Reap What you Sow

Well summers here, Wimbledon is on the box and the grandees are all in the box on the box to witness history in the making and they will (some of them) pay for the privilege. England have lived up to their historic football reputation, turn up, taunt and flaunt, get trashed and make a shameful exit, all that promise and no delivery from people with average skills, that have no true ‘World Class’ stars in the ranks.

The happy young things are out and about putting on their best pulling power acts, as the mid lifers all settle into cruise speed to take it all in and formulate golden memories to look back on, or at least that is what they tell themselves they are really doing.

The EU Tippler and the British bulldog, yes the British press are at it again and the Germans rant in with yet another football reference (hope Rooney was listening in), pack for a holiday, turn up, line up the shot, miss, return in shame to face the horrible question are any of you worth the money you keep taking as if you earn it in some fashion, when it clearly shows you all think you deserve it, no better than that White Dee or the woman who thinks her benefits are her money.

In all the rush to judge people by some mythical moral measure or some hypothetical ethical model is an exercise in back biting and baiting, a very human pastime. Set them up then knock them down very British old bean. You could say it’s the other national pastime right up there with the need to queue, talking about the weather (no complaints?) and of course knocking anybody you think is having it better than yourself, the basis for the good old British grumble, that once at the height of its infamy was coined in the expression ‘the whingeing pom’, still with the latest trend by the papers about Cameron’s choice of spin doctor and his unfortunate fall from grace, just really another egomaniac that saw an opportunity, and a chink into the privacy realms of the tabloid favourites, and never once asked if he had that right to invade someone’s personal space, though every cop in the land and their legal agencies are trying to legitimate their need to know what you’re doing must be metropolitan power envy then, uniforms, authority figures, stop and seize, boss people, brutalise them off camera and your buddies let you off, can’t see what they have to envy, can you.

Sacking and witch hunts, are the game of the day and all on accountability, yet the elephant in the room is again invisible right under everyone’s eyes and no one sees the truth for the lies. So let’s play a game of the emperor’s new clothes shall we. First lets establish the facts the players and then outline the field of conflict…..

Every nation in the world has resources from man and materials to skills and property as well as natural products. Every nation in the world runs an economy, they have banks, collect taxes, provide services and trade with other countries, in the beginning national product plus surpluses. Now industrial production of produce and goods is traded on a worldwide exchange system, that trades in stocks and shares, goods and even a comical thing called futures. Every nation sets budgets and sets taxes to provide for services, it then sets target production figures, from previous output, to ease the deficit, the concept of a healthy nation is one that makes a profit and not a loss. Every strata of a nation has to hire people who are qualified accountants to run everything from personal finances to schools, markets, farmers, banks……

The present recession and all of its woes have all been managed by professionally trained expert accountants, that must qualify to a particular standard of capability, yet the world-wide recession, still happened, don’t see any of these people being carpeted now do we. Banks hired gamblers to run risks to make investors money, not to run banks better, to deliver better services, to strengthen economies and to aid their nation. To just give themselves more bonuses, to fill their investors pockets, and who’s the one facing the bill.

With all of these professional money handlers, budget makes, and book balancers controlling money, could it now be time to employ people who are just good with money and always make a profit, that balance the running of things so that no cannibalising has to be done, no downgrading or redundancies. You know people who are not so full of themselves that they think they are worth it. And are not the first to pick on people like White Dee, and claim that they are really different from her and her ilk, and that they are just prone to market forces (set by banks) well past the time when whole harvests could be lost, pushing prices up, ever wondered what long-term storage was for, making mountains out of surplus.

So the next time people cry for heads to roll you have to look at the grade and quality of the goods and to see if anything is indeed fit for purpose. There are no world-class politicians, as Blair’s recent public schism shows. Putin is playing rock and roll politician and likes hanging tough, tailgating any idiots he looks down on. Cameron well old boy is still suffering from performance issues, Merkel is on a world-class blitzkrieg, bulldozing the opposition and invading on all fronts other sovereign nations private reserves and public investments. Obama is still trying for the record as the First Internationally liked American president only Clinton stands in his way. Blair has been sussed for the ‘Non’ peace keeper he really is and china is behaving like a typical teenager including youthful outbursts when meeting their betters. Banks the world over will pass on toxic debt, are in a game of one up-man-ship. Careful where you deposit your money, you may just be giving it to dippers and profiteers that have their own agendas.

As Wayne Rooney a weekend entertainer and mid week practice boy, is being slated for just not being a world-class sportsman, shame the local boy dun good is being held up so high, by the people who over rate the British football status, yes it’s our national sport, yes we still play it at home and much better than abroad, could be the repressed Brit’s inability to perform on demand (let’s not ask the wags, keep the conversation out of the gutter press shall we) and are held up to international standards, this nation treats football like a local pastime a pub team game, or just five a side fun. In the land of the great internationals, their legends come from the mean streets and it is seen by hungry people with a will to escape their life of poverty as a lifeline. We now no longer qualify to this degree but we can all sit and watch world-class players showcase their talents for the world once every four years.

In this day and age hindsight is a terrible mistress, due to short memory syndrome, rosé coloured glasses and the need for cover-ups, whitewashes and of course that old catch-all, national security. But foresight is still a great deal short-sighted by fuzzy facts and fictional results peppering everything.

We are living in a country where young idealist that believe in the liberty of their homeland have not brought shame to their nation and their parents by killing in this land that has helped them realise their own self empowerment and civil rights to take the fight to their homeland in its defence, they could have started here, they chose not to. The terrorist that turns the weak willed and uses an infidel to kill infidels is doing his job and doing it well, the tactics are deplorable, but the resources are there and the infirm are susceptible to their attentions, after all we try to brush them aside or just outright ignore them making them ripe pickings for a murderous mindset to use and deploy against our own (Lee Rigby). This is a diminishing process in this nation as most of us are stable and not reactionary and tend to hold out for more proof, or just can’t be swayed easily from our own national purpose.

Now if all the propaganda about dope and its effects were true you would think the numbers would be significantly higher from the radicalised protesters and hippy heads that over populate the radical program, so don’t believe the hype after all the legalising of the substance will only ever happen when the war waging, to kill the private sector suppliers off ends, when the patents are applied for and sanctioned by the state accountancy services and duly licensed of course, and then the new rhetoric of its health benefits will be rolled out in a new dawning wave of commercials.

Ah well the more it changes, the more we are stuck with the bullshit.